You’ve just explored the Peristyle of Diocletian’s Palace, the most significant historic sight in Split, Croatia, and now you are about to enter inside. You walk straight into the vestibule of the emperor’s palace. It is a fairly narrow and very tall structure which was built to withstand the test of time and it has. Even though it’s smaller compared to the other sections of the palace, it is equally amazing and worth exploring. 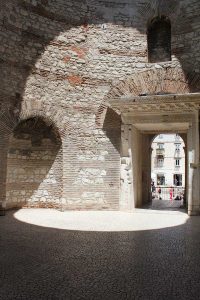 The vestibule of the emperor’s palace played the role of the entryway into the residential quarters of what was essentially a fortress with multiple buildings. What first strikes the visitor is that this structure is rectangular from the outside and circular from the inside. When you are inside, you will inevitably feel the grandeur of the vestibule. The immaculately laid stones and Roman bricks go up and up. But where’s the ceiling. What is now an opening through which you can see the sky used to be a magnificent dome. It is not known when it collapsed or what the causes to this unfortunate event were.

The other thing which strikes you about the vestibule of Diocletian’s Palace is the set of niches high up in the walls. At the time of the emperor, they were used for displaying statues of the Roman gods. You can only imagine how striking they were with the shine of the white marble and the intricate details of their clothing. Archeologists and art historians believe that once the walls had marble slabs and intricate mosaics while dome was covered with awe-inspiring color frescos. While you cannot see them today, you should not miss out to look at the intrinsic decoration of the main gate. Just look up while you are walking through and you will see picture-perfect floral motifs. 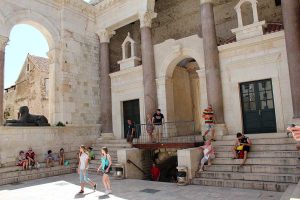 Just like all buildings inside Diocletian’s Palace where guests were welcomed, the main purpose of the vestibule was to mesmerize the visitors. We can only imagine what these people must have felt when they entered this space from the Peristyle. It was and still is easy to be humbled by what surrounds you. This is how ambassadors and other significant people were made to bow in front of the emperor in their minds before they actually did it upon meeting him. It’s hard to deny the fact that the Romans were shrewd politician.

In the Roman world, the emperor had a divine origin. In fact, he was the son of Jupiter, the king of the gods. The role of the vestibule was to reinstate this. It served as a “window to the sky”, enabling Jupiter to look upon his son and vice versa. A statue of the king of the gods must have been present inside too. 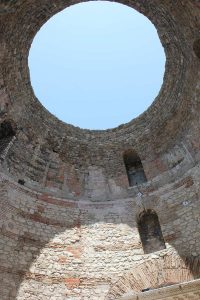 With the dome gone, the sunlight makes the vestibule of Diocletian’s Palace shine brightly once again. It’s incredible to see the sky from down below. Depending on your position, you can also catch a glimpse of the bell tower of the city’s cathedral – Saint Domnius or Sveti Dujam in Croatian. The tower was built in the 12th century and is one of the oldest and finest you will see in Dalmatia. It is somewhat ironic that people can now see the symbol of Christianity, a religion which Diocletian thought threatened the Roman empire, through the very same building that used to portray the divine connection between the emperor and the Roman gods. What’s probably more important for tourists is that they can take awesome photos to brag about their vacation in Split. 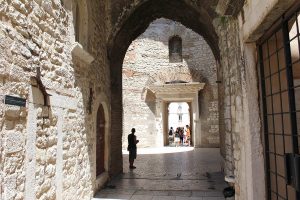 The vestibule of the emperor’s palace has amazing acoustics and this makes it the perfect place for klapa performances. This is a traditional form of acapella singing in Dalmatia performed by a group of several singers. In fact, klapa means a group of friends. This music is now part of the UNESCO Intangible Cultural Heritage of Humanity. It pays off to check when such a performance will take place in the vestibule during your stay in Split, Croatia and attend it. It’s a great example of the blend between ancient, traditional and modern culture in this vibrant city.

The vestibule of Diocletian’s Palace in Split is waiting to be discovered.