Diocletian’s mausoleum is part of the emperor’s palatial complex in the heart of Split, Croatia. The building, which was constructed at the run of the 4th century AD, is still in use today and is an important place for the community as well as for tourists who are eager to go back in time. Discover the amazing story of this ancient building to make the most out of the tour that you will take around Diocletian’s Palace when you are in Split.

The Role of the Mausoleum

The building was constructed to house the remains of the emperor after his death. It is situated right next to the Peristyle (courtyard) within what once was the imperial section of the palace. It was strategically positioned so that the people arriving to the palace would notice its splendor from far away. The mausoleum was built before the passing of Diocletian and signified his divine descent. The Roman emperor was considered to be the son of Jupiter and this is what gave him power over his subjects on earth.

It is interesting to note that the Greeks and the Romans of earlier times considered the choice of resting place within the city walls, let alone a dedicated building, sacrilege, but by the time of Diocletian’s rule this concept had changed dramatically. Long after his passing, the mausoleum would serve as a place of worship signifying his deification and that of Roman rule in general. This did not happen in reality, but we can still marvel at how the Romans built and decorated the final resting place of their beloved emperor.

The octagonal shape of the building was perhaps the first thing that impressed those arriving to the palace. It was built with the use of local limestone and marble, tuff taken from the beds of the Jadro River and brick made in the factories of nearby Salona, which you should not miss to include in the itinerary for your Split holiday. The marble and limestone for the mausoleum came from the quarries on the island of Brač, which is another attraction worth your attention. 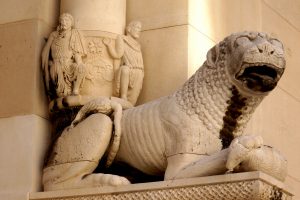 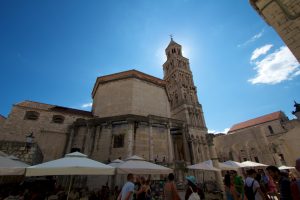 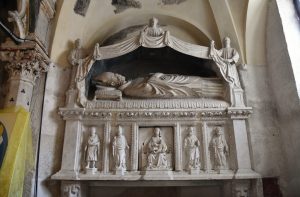 The mausoleum’s splendor was highlighted by the exterior columns and their elaborate capitals in Corinthian style and the two sphinxes that guarded the entryway. Only one of them stands in place, but its presence is more than significant. The sphinxes for the imperial palace were “original”. Diocletian had them brought from Egypt to make them part of the culture celebrating his divine status.

The columns inside the building served a purely decorative purpose as the walls are self-supporting. The Roman brickwork is still clearly visible even though it has been more than 1700 years since the mausoleum of Diocletian’s palace was built. The elaborate reliefs are simply outstanding. When the building was constructed, it must have had gorgeous gold mosaics and dome frescos too.

The center of the mausoleum was reserved for Diocletian’s sarcophagus. It has not been preserved, but it is considered to have been made of porphyry, also known as the Imperial Roman stone. It is possible that the piece of porphyry now on display in the Split Museum may have come from the sarcophagus.

From Imperial Mausoleum to a Christian Cathedral

In 653 the mausoleum was consecrated by the first bishop of Split and has been the city’s cathedral ever since. It is the Cathedral of Saint Domnius or Sveti Dujam in the local language. Saint Domnius, who is also the patron saint of Split, was the Bishop of Salona at the time of Diocletian and was prosecuted by the emperor for this faith. The cathedral’s treasury contains relics of the saint. 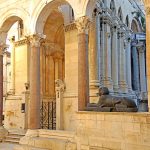 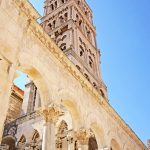 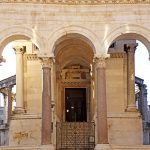 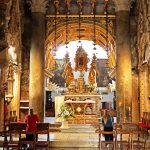 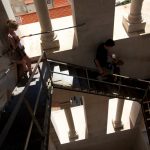 The Cathedral of Saint Domnius is the oldest Catholic cathedral that is still housed in its original building which has not undergone major renovations. The temple’s bell tower was constructed much later, in 1100 AD, but its Romanesque style enabled it to match the original architecture. This is how a unique religious complex was created.

Today, you can marvel at both the works of Roman and Croatian architects and artists inside the Cathedral of Saint Domnius which was built as the mausoleum of the Roman Emperor Diocletian. Pay special attention to the columns, capitals and reliefs and to the door of the temple which is regarded to be one of the finest examples of Romanesque artwork in Croatia.

Posted on May 8, 2017 by SugamanTours in Diocletian's Palace Attractions
Tagged as diocletian's palace, mausoleum