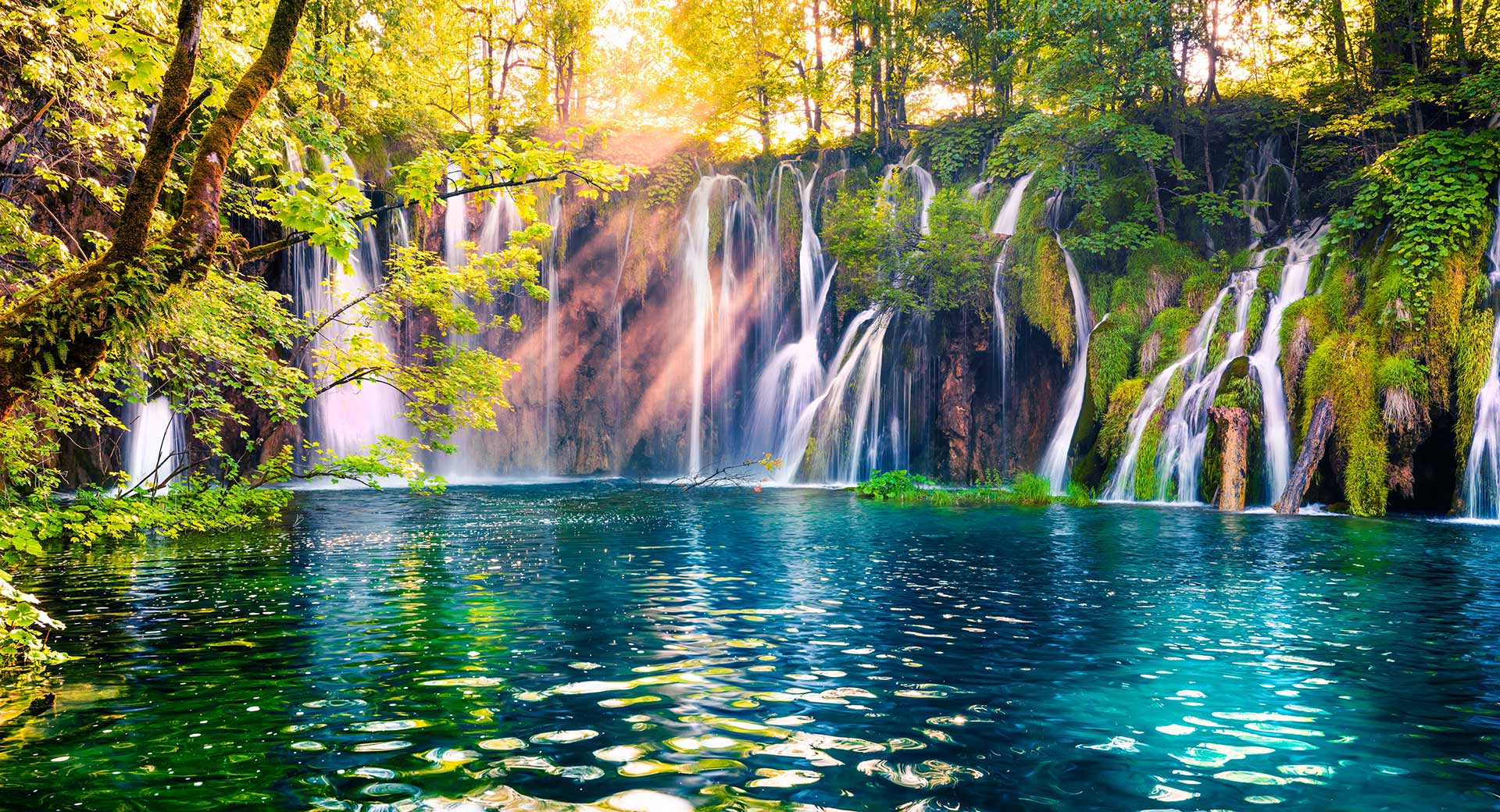 If you ever get the chance to experience the 8th Wonder of the World, which we consider to be Plitvice Lakes National Park, don’t think twice.

Everything you need to know about Plitvice Lakes National Park

While you might have guessed that Plitvice Lakes isn’t technically the 8th Wonder of the World, it could easily be in the running – and it’s not hard to see why. Thousands of tourists are driven to Croatia each year to see one of nature’s best miracles, and quite frankly, Plitvice has been turning heads since it became a national park in 1949. The park’s popularity certainly grew when it was registered as a UNESCO World Heritage Site in 1979, and in 2018, more than a million curious travelers flocked to Plitvice to experience its 16 cascading lakes. What makes Plitvice so unique is that these interconnected lakes follow the flow of water. They are also separated by travertine barriers and change color like chameleons depending on various factors, like the minerals or organisms present or the angle of the sun. Thus, Plitvice Lakes is continuously evolving. 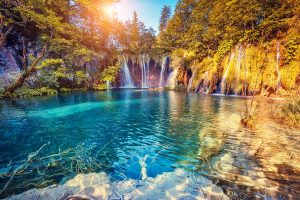 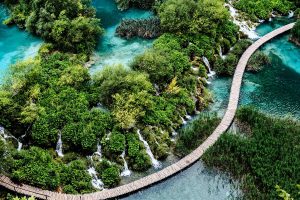 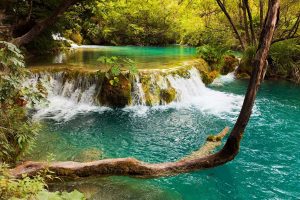 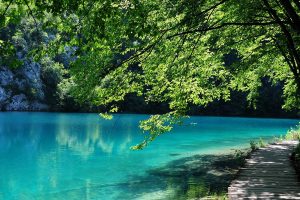 What can you expect on our Plitvice Lakes National Park tour?

We’ll kick off early from Split (around 7 am) to ensure that we get to the park before noon, though we promise the four-hour drive will be anything but taxing. In a lavish and air-conditioned vehicle, you’ll enjoy the perks of free WiFi and comfort on the road to Plitvice, which will make the time pass with ease. Before you know it, you’ll be ready to open the book of nature’s finest fairytale. Let’s turn to page one – Plitvice’s Upper Lakes.

Follow the trails across the lakes, through the woods and enjoy in the outdoors, deeply immersed in one of the most beautiful masterpieces nature was able to create.

You’ll embark on a full guided tour, first following the guide’s footsteps to explore the series of twelve interconnected lakes called the Upper Lakes. Once you’ve laid eyes on all twelve on them, with a database of photos for your memories, you’ll turn to page two of this Plitvice fairytale – the Lower Lakes. Plitvice’s Lower Lakes consists of four lakes located within this limestone canyon, and feature the major attractions of this national park. 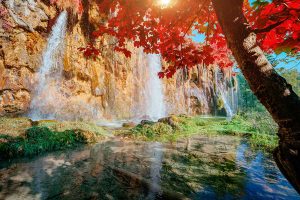 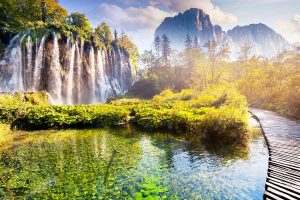 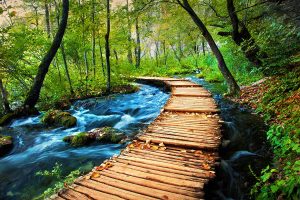 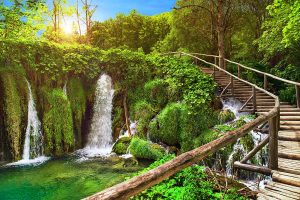 After a solid four hours of sightseeing, you’ll have an hour to kill for a local lunch which you can enjoy in one of the park’s traditional restaurants. With satisfied bellies and a lifetime of memories, we’ll make our way back to Split in no less luxury than we came and ensure you arrive in time for a delightful dinner in the Dalmatian capital (around 8 pm).

What attractions will you visit inside Plitvice Lakes National Park?

You’ll begin by exploring the series of twelve interconnected lakes called the Upper Lakes. Following scenic wooden paths, you’ll first encounter Prošćansko Lake, Okrugljak Lake and Labudovac Fall, which is formed by the flow of Ciginovac Lake when it streams into Okrugljak. Even more impressive is that Labudovac is 20 meters tall!

You’ll continue with your guide to Veliko, Malo, Vir, and Batinovac, which are all connected to Galovac, known as one of the park’s most striking attractions. Thanks to a walking path, you can cruise over the lake to gawk at this natural artistry. It is also one of the most photographed areas in the park. Known as the third largest lake in the park and the eighth highest, Galovac is surrounded by dolomite rocks wrapped in trees and shrubs, speckled with waterfalls, and radiant travertine barriers, all bordered by larch trees which paint this part of the park in a deep and dark green hue. 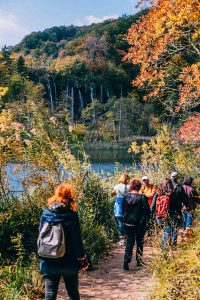 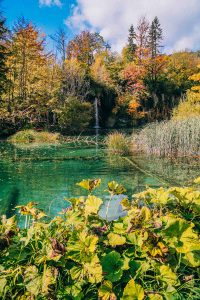 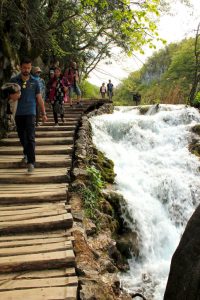 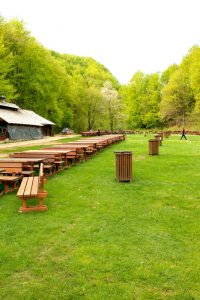 You’ll move onto Milino and Burgeti, which are connected into Lake Kozjak, the lowest lake of the upper section and the largest and deepest lake in the entire Plitvice system. The limestone on its eastern part can be dated back to the Cretaceous! Kozjak actually got its name after the Croatian word for ‘goat‘ thanks to goats that were lost around the lake once upon a time – and some four centuries ago, Kozjak used to be two separate lakes divided by a 40-meter-tall waterfall. That waterfall has disappeared, however, thanks to the travertine barrier raising quicker than the one with the waterfall, allowing the water levels to become equal.

After the Upper Lakes, you’ll experience the Lower Lakes.

Now, the Upper Lakes are really just a teaser for the main spectacle at this national park. Not to discredit the Upper Lakes in any way shape or form, but the smaller cascades and waterfalls of the Upper Lakes set the pace for the magnificent and sizeable sights of the Lower Lakes. Though there are fewer of them in the lower section of the park, their size and power surely make up for it. This part of the voyage involves sightseeing by boat and on foot.

The first stop is Lake Milanovac. Thanks to the flow of Lake Kozjak and Milanovac, the Lower Lakes are formed. Kozjak and Miilanovac also create the Milanovački Slap – a waterfall nearly 20 meters high and quite wide. You’ll want to spend some time here taking photos. 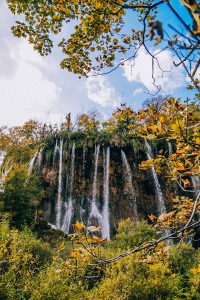 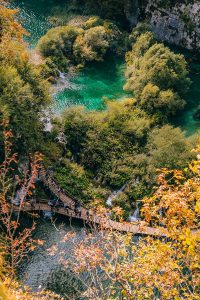 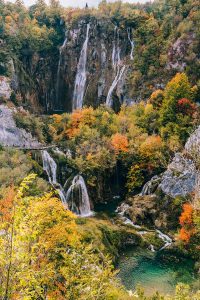 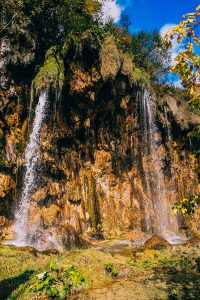 Next is Lake Gavanovac, one of the smallest lakes in the entire Plitvice system, which is connected with Lake Milanovac by the Milka Trnina waterfall, named after a famous Croatian soprano who made her mark in the country in the early 1900s. Gavanovac is also where you’ll find the most photographed attraction in the park – the Great Cascades. Here, the colors range from blue to turquoise, emerald, and grey and make you feel as if you’re in a magical scene from Game of Thrones!

Kaluderovac, one of the largest lakes in the system that is fed by Gavanovac and the Great Cascades, follows after. Abundant in a variety of fish species, this lake is also bordered by cliffs up to 40 meters high.

The last lake in the Plitvice system is Novakovica Brod. What’s unique about this lake is that it is dressed with waterfalls some 25 meters high! But what Novakovica Brod is known for best is that, along with the Plitvice Stream, it creates the biggest attraction of the entire park – the Great Waterfall. Thanks to their heavy flow, the Great Waterfall gushes from a height of 78 meters, making it the tallest waterfall in the entire country. This area includes plenty of viewpoints so you can gawk at this natural wonder from different heights and directions. 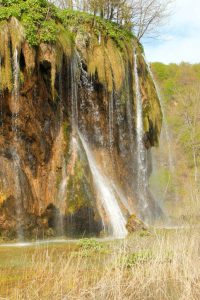 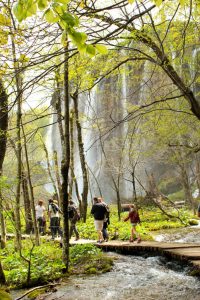 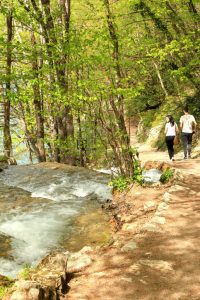 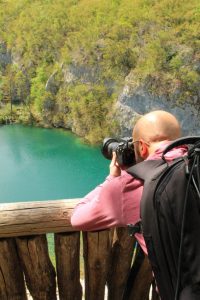 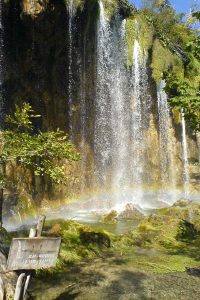 Can you swim inside Plitvice Lakes National Park?

Unlike Krka National Park, swimming is forbidden at Plitvice Lakes National Park. But this minor, minor detail should not stop you from experiencing Plitvice in all of its glory!

What do you need to bring to Plitvice Lakes National Park?

For a full day at Plitvice Lakes, there are some necessary items you should bring.

For example:
– A very comfortable pair of shoes, since you’ll be walking for many hours on wooden paths. Cozy socks are equally as important!
– Water. And enough of it. No matter the season, you’ll need to hydrate while exploring Plitvice!
– A camera, whether it be on your smartphone or a professional one. And an external battery pack is never a bad idea, as you should plan on your battery draining thanks to all the photos!
– Dress appropriately for the weather, and definitely check the weather report before your excursion.
– Hats, sunglasses and SPF, because your skin is precious and the sun could get very, very strong in Croatia.
– Easy snacks like granola bars or nuts are good to keep handy, because you know all that walking will work up an appetite before lunch.

What if you get hungry at Plitvice Lakes National Park?

Fortunately, there are worse places than Plitvice Lakes National Park if you get hungry. Visitors to the park can choose from a variety of restaurants at the entrances and within the park. Some are self-service, some have terraces surrounded by the sounds of the waterfalls, and there are even some with live music.

You can enjoy traditional local dishes to the Lika region like meat roasted ‘under the bell’ (what we call ‘peka’), potatoes (which are a staple of the Lika region), and plenty of cheeses and smoked meats. You can also find fast food dishes, sandwiches and sweets.

However, it is important to note that once you’re inside the park, there are no grocery shops. As with any long tour, come prepared with water and snacks!

Can you get souvenirs from Plitvice Lakes National Park?

Your chances of shopping are slim at Plitvice Lakes, so we suggest you make your own memories that will last a lifetime!

However, the Kozjačka draga restaurant has a small area for souvenirs, where you can find things like umbrellas and raincoats and some Plitvice Lakes branded items.

When is the best time to visit Plitvice Lakes National Park?

While we like to think there is never a bad time to visit Plitvice Lakes, it is entirely up to preference. If you’d like to avoid the crowds and baking in the heat, then the summer is not the time you’ll want to visit Plitvice. You should also keep in mind that the summer is the busiest time for Plitvice, which sees around 11,000 visitors a day! 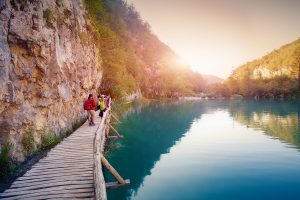 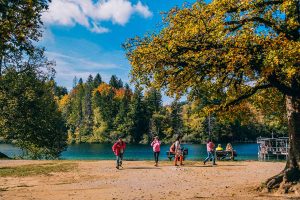 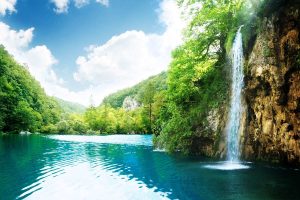 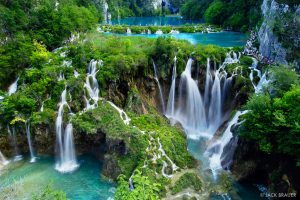 The spring and autumn are lovely times to visit as crowds have thinned and the weather is temperate. In the spring, the flowers bloom, and in the autumn, the leaves change colors. You do, however, have to plan for the occasional rainfall.

Winter scenes at Plitvice Lakes are straight out of a fairytale. The park is covered in snow, the waterfalls are frosted, and you’ll experience a true winter wonderland. The one downside, however, is that the upper parts of Plitvice Lakes are typically closed to the public.

Visitors to Plitvice Lakes must abide by the following rules, which we promise is not too much to ask.

Follow the trails across the lakes, through the woods and enjoy in the outdoors, deeply immersed in one of the most beautiful masterpieces nature was able to create.

Best way of getting to Plitvice Lakes National Park from Split?

Plitvice Lakes is around 250 kilometers north of Split. Driving times range between 3-4 hours, depending on your mode of transport.

While you could rent a car and take the highway up to Plitvice from Split, we should advise that prices, no matter the season, could be a bit costly. And then there’s fuel, too.

Buses from Split to Plitvice Lakes are another, cheaper option, though travel times could reach up to 5.5 hours, and buses will usually be crowded – and warm.

However, the foolproof way to travel to Plitvice Lakes is with us, in our air-conditioned, WiFi equipped, and luxury minibus, which will get you there in comfort and style.