One of the major landmarks within Diocletian’s Palace in the heart of Split, Croatia, is the Temple of Jupiter. The fairly small building is in close proximity to the Peristyle, the palace’s courtyard, and stands opposite the emperor’s mausoleum. The temple has been excellently preserved both on the inside and out and modern-day tourists can see it in all its glory. Find out what its significance is and what you should not miss to see when exploring this unique building.

The Temple from the 3rd Century AD to the Present Day

Historians have dated the building of the Temple of Jupiter between 295 and 305 AD. It was built as part of the imperial palace’s complex right across the mausoleum – the final resting place of Diocletian. The location was purposefully chosen to signify the divine connection between the emperor and Jupiter, the Ancient Roman god of the sky and thunder and king of the gods. 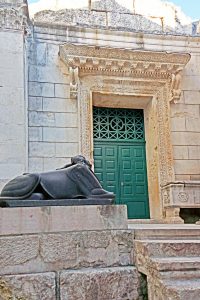 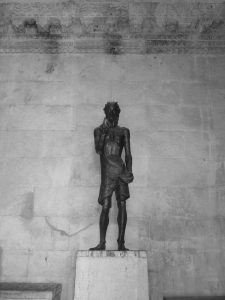 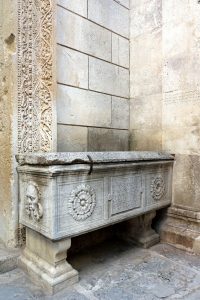 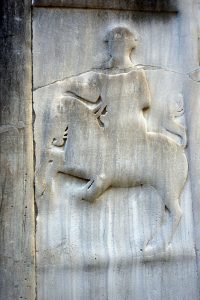 Now the temple is surrounded by narrow streets and other buildings which make it easy to see how Diocletian’s Palace became the central part of the growing city of Split in the Middle Ages. It is thought that initially it had its own courtyard which emphasized it significance. The Middle Ages were the time of major transformation for the temple. It became a baptistery of St. John the Baptist in the 6th century and is now part of the Cathedral complex of the city. Tourists are captivated by the blend cultural and religious symbols that coexist peacefully and even in symbiose in the center of modern-day Split.

Major Highlights Worth Your Attention

The Temple of Jupiter in Diocletian’s Palace is believed to have had a six-column portico (four columns in the front and one on each side) just like the Temple of Augustus in Pula, but the entryway is now completely open. Still, there is a lot to see. Don’t be scared of the decapitated black granite sphinx that seems to guard the entryway to the temple. It was one of the several made during the time of the Egyptian pharaoh Thutmose III and brought to the palace by the Romans. Later the Christians destroyed the sphinx’s head because they believed it was a pagan symbol. 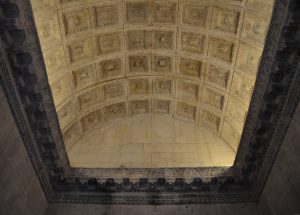 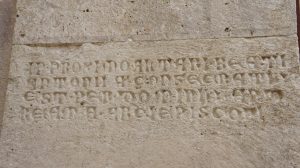 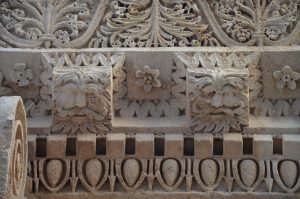 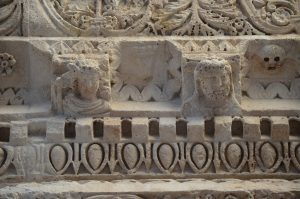 Upon entering the temple, stop for a minute or two to explore the relief above the door. It is made of white limestone which was quarried on the nearby Island of Brač. Among the intricate decorative motifs including flowers and leaves, you will notice the carved images of various Roman gods and heroes. These include Jupiter, who the temple is dedicated to, Apollo, the god of truth and prophecy, Helios, representing the sun, Victoria, the goddess of Victory, Triton, the son and messenger of the god of the sea, and Hercules.

The scoffed vaulted ceiling of the Temple of Jupiter is another one of the decorative marvels which will leave you breathless. The barrel-like structure consists of 64 individual panels, each with richly decorated sides and a face representing a particular emotion in the center. It is still a mystery why faces expressing human emotions were used for decorating the temple’s ceiling. It is possible that they played part in religious rituals which took place inside the temple. Alternatively, they might have been an artistic representation of the emperor’s moods emphasizing on this descent from Jupiter.

One of the most striking things inside the temple is the modern bronze statue of St. John the Baptist created by one of the most famous Croatian sculptors of the 20th century – Ivan Meštrović. It is standing right where the statue of Jupiter must have been placed at the time of Diocletian. The baptistery is the place where the sarcophagi of two archbishops of Split are laid.

The temple is also home to the oldest image of a Croatian king remaining intact to this day. It is on one of the marble rood screens and depicts either Peter Krešimir IV or Demetrius Zvonimir with his subjects. It is amazing how much history there is inside this small building.

The Most Fulfilling Experience

Take your time to look at all indoor and outdoor architectural and decorative elements of the Temple of Jupiter when you visit Split. You will also discover some “underground” artworks like graffiti on the walls of the building. You will have a wonderful trip back in time.

Posted on May 23, 2017 by SugamanTours in Diocletian's Palace Attractions
Tagged as diocletian's palace, things to do in split