You don’t have to be a fan of Roman culture or history to be mesmerized by Diocletian’s Palace in the heart of Split, Croatia. It hides many treasures including Diocletian’s cellars which are truly worthy of an emperor, even though he had retired from this position at the time when he lived in what is now modern-day Split. We can only imagine the massive amounts of wine and food that must have been stored there during his time in the 4th century AD. But there is a lot more to these cellars – intriguing secrets and stories of rise and fall. Explore the past and present of this architectural wonder before you discover it in person when you visit Split.

The sheer size of Diocletian’s cellars is enough to impress the modern tourist. They are situated right under the emperor’s quarters and are basically designed as their mirror image. The mirrored floorplan is not an aesthetic solution, but a practical one as the cellar’s walls, columns and archers support the structure above. One can only marvel at the ingenuity of the architects and the craftsmanship of the builders, given that the structure has survived to the present day despite the “abuse” that it has been subject to over the centuries.

Why are the cellars so big? While the structure built by Diocletian is referred to as a palace, it is not a single building, but rather a fortress with multiple areas and buildings. Right next door to the emperor’s quarters was the station of a Roman garrison. The fortress was built not only to offer a luxurious lifestyle to this important man during his retirement, but to provide protection. 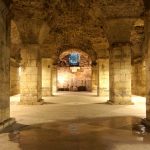 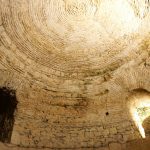 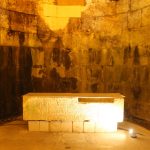 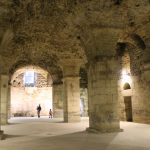 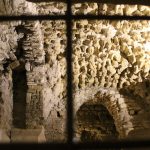 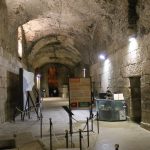 Just like all cellars, the ones of the emperor were used for storing considerable amounts of foodstuffs and wine. Archeologists discovered the remnants of a wine press in the underground structure, which confirms that the Romans didn’t miss to take advantage of the grapes grown on the sunny slopes of the region. It’s easy to imagine Diocletian watching the sunset and sipping fine Dalmatian wine. You can do it too on a balmy evening in Split. 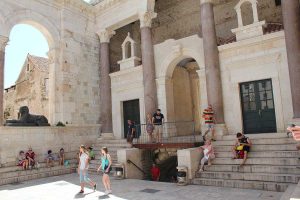 Entrance to cellars from Peristyle

Diocletian’s cellars were also an entryway to the palace for those arriving by sea. The boats and possibly even ships would be moored next to the Brass Gate which let visitors immediately into the palace. This was a practical solution given that the sea route between modern-day Split and Rome was much shorter than the all-land one.

The Shrewdness of Diocletian

This massive underground structure may seem like a maze, which naturally feeds the imagination, but virtually every square inch of it had a practical purpose. One of the truly clever solutions was the round room of Diocletian’s cellars, situated right under the foyer of his bedroom. It possesses amazing acoustics, and surprisingly or not, it wasn’t constructed for entertainment purposes. Its job was to protect the emperor, who still had strong political power, from assassination attempts.

If anyone entered the palace from the underground floor, Diocletian or his guards would hear the intruder immediately and be warned of their presence. We don’t know for sure if the round

Posted on May 3, 2017 by SugamanTours in Diocletian's Palace Attractions, Split Croatia
Tagged as basements, diocletian's palace