Besides the Blue Cave, the most popular of all the caves of the Vis archipelago, and the main attraction of majority of day tours heading to Vis island, there is another cave which will leave you enchanted if you get the opportunity to discover its natural beauty. 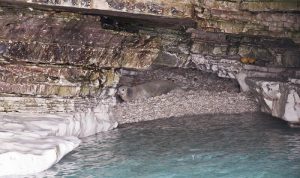 Located on the southern tip of Bisevo island, just a short ride from the Blue Cave with our speedboats, is the Monk Seals Cave or Medvedina Spilja as it is called in Croatian language. The cave got its name after the Mediterranean monk seals who used to reside in these waters until the middle of the last century.

Monk Seals today are one of the most endangered mammals on the planet Earth and sadly can no longer be found in these waters. This is mainly because the monk seals used to tear the fishermen’s nets feasting on all the fish they found inside which quickly made them the fishermen’s enemy number one.

Bisevo island, which is primarily made out of limestone, is filled with number of caves which were used by the Mediterranean monk seals as the perfect place for protection, rest and, most importantly, as a spawning ground. This made the area of Bisevo island and Vis archipelago an ideal habitat for monk seals.

Monk Seals Cave on Bisevo island is a perfect example of such habitat. As opposed to Blue Cave, the monk seal cave is not a usual stop of the day tours so you will typically not encounter a lot of boats or people there. 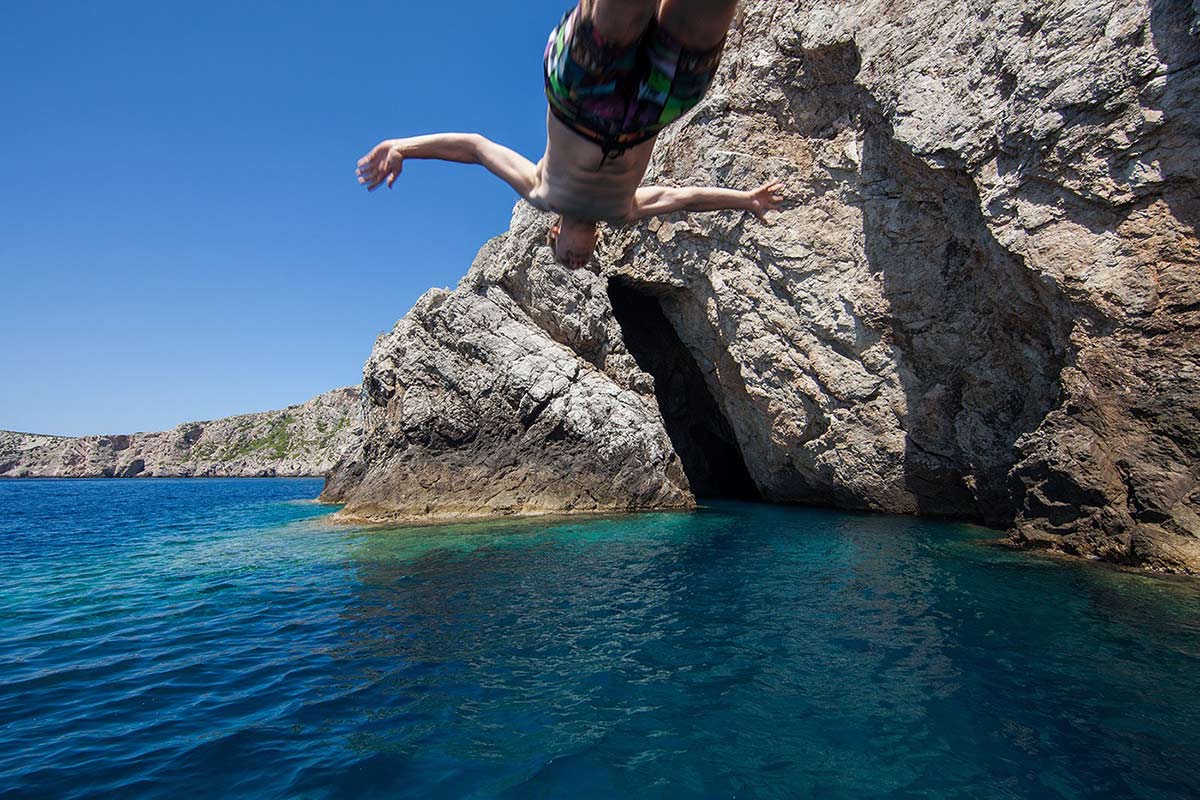 Event though the entrance to the cave is quite tall (around 17 meters high) and around 5 meters wide, it is not always possible to enter the cave with our speedboat. This mainly depends on the sea condition and the tide. Regardless of if we enter the monk seals cave with our speedboat or by swimming in, there is a certain amount of courage and adventurous spirit needed to explore the cave in its entirety.

As we enter the tall gate of the cave, you will enjoy in the blue glow illuminating the cave interior of the cave as the light penetrates through the entrance. The monk seals cave is quite large, going deep inside the island about 160 meters, which means that the light emanating from the entrance can not lighten the entire cave. 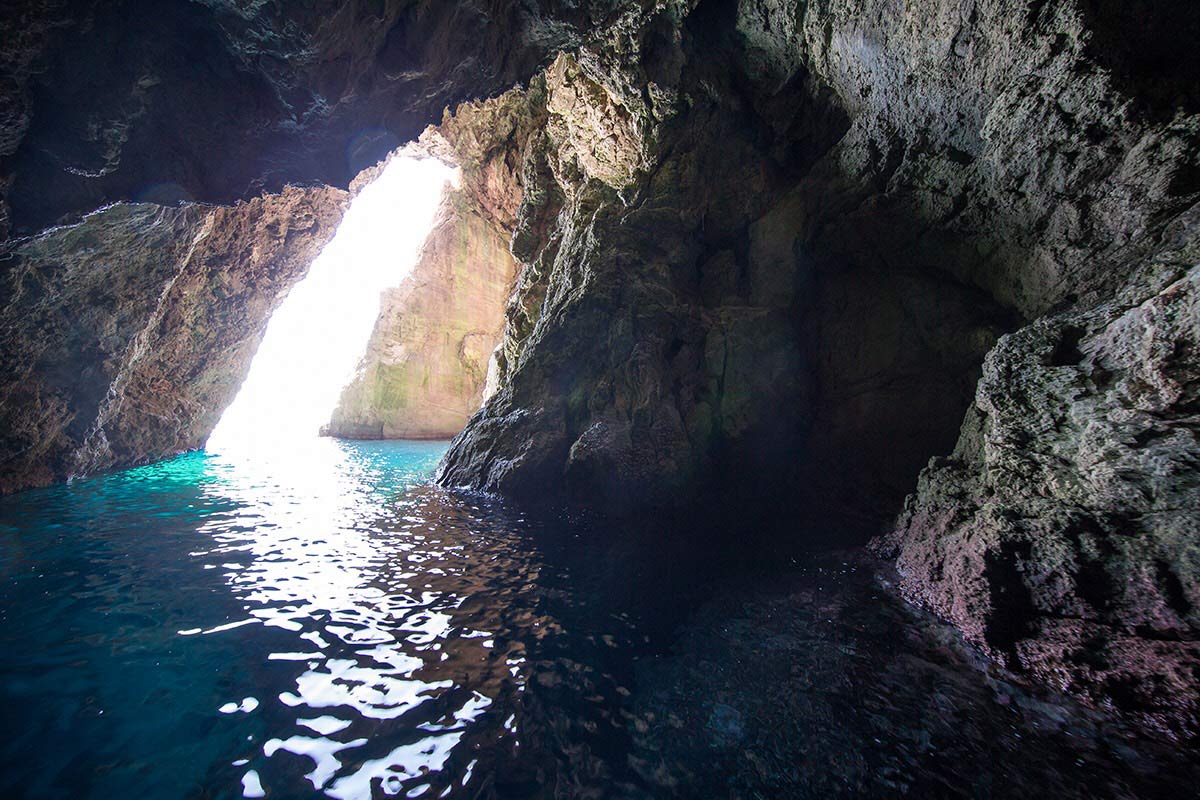 Around 50 meters inside the cave, the cave becomes narrower as it turns to the right. The stone located in the middle of the cave prevents our speedboat from going any further (if we managed to enter the cave with our boat) and from here you must continue exploring the cave by swimming and snorkeling. As, we are now deep inside the cave where the light no longer penetrates we will need lamps to continue on.

At the end of the cave you will find a small pebble beach where Mediterranean Monk Seals used to get out to rest.

Even though Monk Seals are the most endangered mammals on Earth, from 2003, there have been reported sightings in the Adriatic once again, even around Bisevo island. Hopefully, with our current understanding and appreciation for the wildlife we will help Monk Seals thrive once again and make them a common sighting in the Adriatic sea.

The best way to visit Monk Seal Cave is to rent a boat with or without a guide and head towards the southern peak of Bisevo island where the cave is located. That is of course if you are located somewhere on Vis island, most ideally in Komiza. From anywhere else, the trip to Monk Seal Cave can be quite an adventure.

The other way to visit the cave is if you are chartering a boat or a sailing yacht for a week which gives you enough time to prepare your trip to Bisevo island. Dinghy is ideal to enter inside the monk seal cave for exploration.

If you are located in Split, there is no easy way to see it because of the distance and because monk seal cave is not a usual stop of the most common Blue Cave tours from Split. Luckily, here you can find a Blue Cave tour from Split which, besides Blue Cave, visits Monk Seal Cave as well.

Other Caves of Vis Archipelago 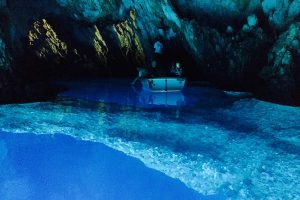 Hidden from the public eye until mid 19th century, the Blue Cave on island Bisevo is the most popular cave of Vis archipelago, if not on the entire Croatian Adriatic. There are organized tours you can join to explore the inside of the cave. It is not allowed to enter the cave by yourself.

Read more about the Blue Cave on Bisevo island 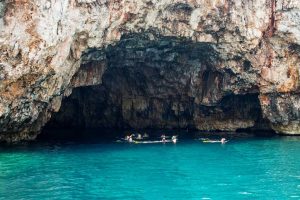 Characterized by the hole in the cave ceiling through which light beam enters inside the cave shining through all the way to the sea bottom. The green glow of the cave is due to the micro organisms and algae residing on the cave walls.